We have all seen the headlines about economic recession. We’ve also seen how the financial woes and unemployment levels of the 1930’s Great Depression, with a 9.5% unemployment rate seem to be paling in comparison to our current reality of 15% unemployment because of Covid-19.

Recession is a bitter reality we are all facing, represented by the global #We’reAllInThisTogether, but what are people at the intersection of particular groups experiencing that might be even worse?

This is where the “Shecession” comes in. In contrast to what has come to be seen as “The Mancession” which was the term used about the recession of 2008, which impacted 80% more men than women, this time around, in 2020, according to  C. Nicole Mason, president and chief executive of the Institute for Women’s Policy Research, “We should go ahead and call this a ‘Shecession’, because unlike the 2008 recession, this crisis has a predominantly nonwhite, female face.

How is this explained and how can it even make sense when we have spent so much time and so many tears evolving our  anti-discrimination, and  diversity, equity, and inclusion efforts over the last decade?

We already knew that women were in a worse financial position than men long before this pandemic occurred, but we see now, this crisis is bringing an even heavier load to bear. On average, women are paid 18% less than men in the U.S. They have 30% less money in savings. Two-thirds of minimum wage workers are women—and their jobs are at greater risk as service industries have shut down to contain the spread. The financial picture is becoming even more dire because of the economic impact of the pandemic that we are experiencing right now.

The following data sums up our current situation during the first Quarter of 2020 when the global covid-19 pandemic began to escalate:  According to the Bureau of Labor Statistics, women in the United States accounted for 55% of the 20.5 million jobs lost in April. The majority of women who lost their jobs are minorities who are overrepresented in industries directly affected by COVID-19 such as beauty, retail, hospitality, service industries, recreation, and education. In the united States, these women make up more than 60% of low wage workers. 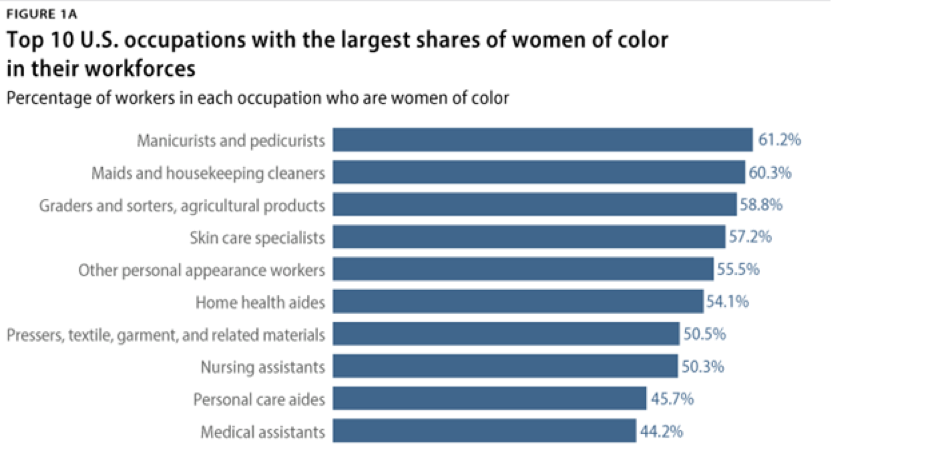 Data from Northwestern University research on Gender parity during Covid-19 from April 2020, determined that full-time working mothers in 2 parent homes are doing approximately 22 hours of childcare per week alongside their fulltime jobs during CO19.

Sheryl Sandberg’s LeanIn and Survey Monkey research has honed in on findings that show as a result of the current financial crisis “women are shouldering a much heavier burden of household labor and caregiving during Covid-19, and it’s taking a toll — they’re experiencing physical symptoms of stress and burnout at up to twice the rate of men”. Their findings also indicate that employers are providing limited support for employees who are trying to manage increased responsibilities at home during the pandemic.

Venturing out to Europe, a new survey just released by University College London (UCL), the number one public research facility based in the UK, demonstrates the stark contrast the toll this pandemic is taking on mothers versus fathers. The results show that women with kids are 47% more likely than men with children to have permanently lost or quit their jobs since February. They are 14% more likely to have been furloughed.

The burden on U.S. mothers at home we noted earlier, is being echoed in the UK. The UCL study goes further and points to nuances of parents’ new at-home existence that are easily overlooked. According to Claire Zilman of Fortune, “it reveals, for instance, a sort of child-interruption gap: Moms are far more likely than dads to be interrupted during their paid working hours. Nearly half—47%—of mothers’ working hours are split between professional duties and other activities like childcare. That figure is 30% for fathers”.

Zilman goes on to quip that “those kid cameos on Zoom are cute, but the study warns that moms’ multitasking is a risk when “focused work time is important for performance.” The mom-dad imbalance on this front could “further [increase] the gender wage gap among parents.”

This data provides a sobering reality check for all of us. As our priorities and mindsets shift because of our life experience in the last 3 months, we see that those most equipped to impact the current organizational reality, do indeed have a roadmap to short-circuit this Shecession.

There is a positive way forward and all we need to do is look at historic success. We must look to those companies who have weathered previous storms, who saw stock price gains of over 14% when those of less diverse companies plunged. We have evidence that these were companies who invested in a truly diverse workforce.

We do not have to roll-back the progress that has been made and allow this on-going negative impact on our organizations on all levels. Instead, we must look forward and alter our path. In our next article, Disrupting The Shecession (Part II), we will examine practical steps that Human Resources and organizations can take to short-circuit the Shecession phenomenon and rediscover the path to progress while we climb out of the current crisis, with our culture’s intact and our companies and people thriving.

Shecession Part II: Disrupting the Shecession – What can Organizations do...
Scroll to top